Would you scan a QR code to donate to the homeless?

Each year, around 7,500 people are forced to call the streets of London their home. Overall, homelessness has risen 134% since 2011.

People can become homeless for any number of reasons including a breakdown of a relationship or family, being made redundancy, or suffering with poor mental health – to name a few.

In recent years, many have become wary of giving money directly to homeless people on the street, fearing that the money could be used to fuel an addiction, or worse, that the person is a ‘professional beggar’.

Greater Change, a new social enterprise, is aiming to change the way we tackle homelessness. 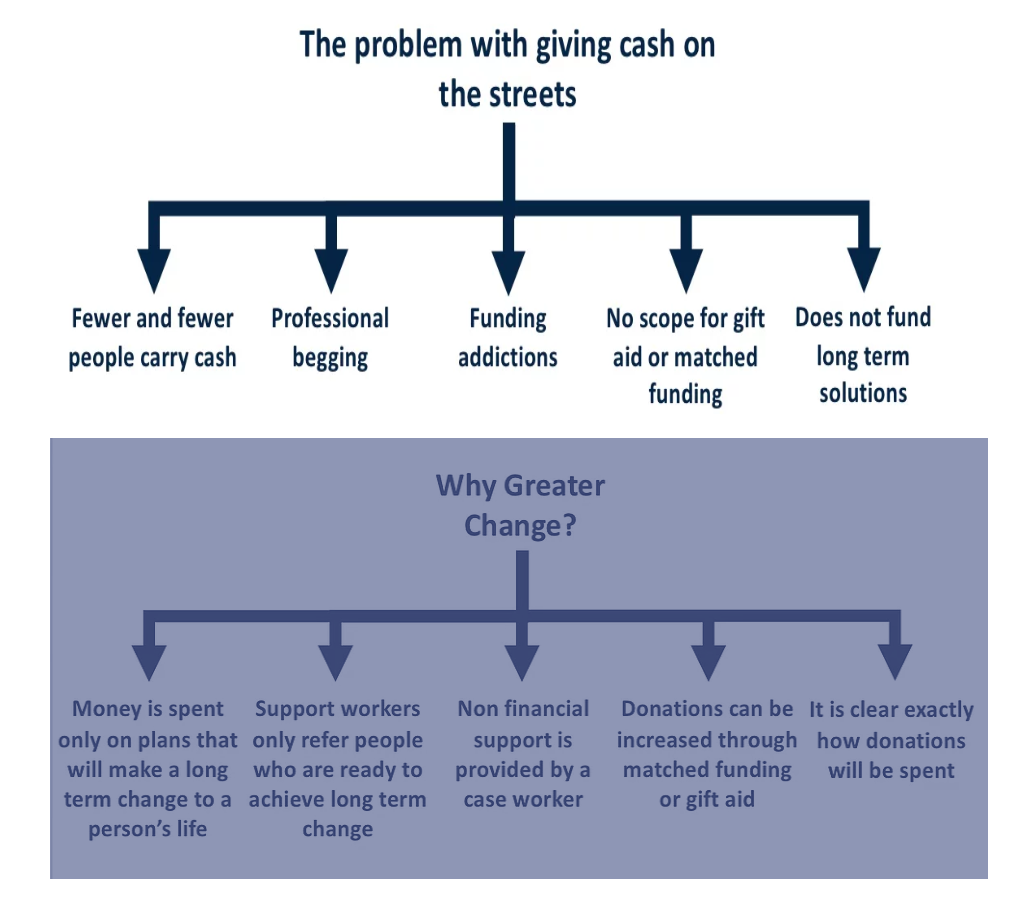 The company has developed a system to allow people to donate to homeless people digitally, via an app.

The person who you wish to donate to can choose to wear a special lanyard with a QR code, that when scanned takes the apps user to a donation page.

Donations can also be made by searching for name (or alias if the person being donated too wants to protect their identity) if they don’t have the QR code with them.

Greater Change is also exploring different ways of using their QR code system, such as business style cards and stickers.

Homeless people do not often have access to bank accounts or smart phones – so that isn’t a requirement with Greater Change. The account is setup free of charge, and no fees apply to receivers, the venture is entirely non-profit.


Alex McCallion, Founder of Greater Change, said: “We know that Oxford is facing a homelessness crisis, and people want to do what they can – but too often, the money given out on the streets isn’t being used to help people break the cycle of homelessness.

Greater Change is all about using technology to encourage members of the public to give smarter and engage more easily. It provides a really quick easy way of giving to local support services along with the ability to see exactly how your money has helped by seeing the specific item it has helped buy. The platform also allows for giving directly to the homeless but with the assurance that it’s being spent to help them move away from homelessness for good.”

How is the money spent?

Donations made on the platform are sent to a local charity that works with the person you donated too, and the money is spent according to a development plan with that person.

An anonymous donor is also matching all donations on the platform, meaning a donation is instantly doubled.

Further to this, the digital transaction means that Gift Aid can be used to top up donations a further 25%. That means an intial donation of £10, plus the matching, plus the Gift Aid means around £25 pounds of actual funding for that person.

While the donor cannot directly decide what the money is used for, they can see what their donation was used to purchase.

If a person’s situation changes after you’ve made a donation, the money is split between other local causes.

The future of Greater Change?

The scheme was founded by Alex McCallion, who noticed that despite large sums of money being donated to homeless people, direct donations didn’t always have a long term effect.

Currently the project is in an early pilot phase – Greater Change is currently developing ways to give donations via text and contactless card payments.