AI: How The Economist’s Machine Learning Algorithm Has Predicted the Outcome of U.S. Elections

The Economists’ presidential forecasting model accounts for polling, demographic, economic and historical data to answer the most pressing question of 2020

Winter is coming, but the political climate of America is just warming up.

In the black box that holds the most anticipated verdict in the history of the United States, The Economists’ machine learning algorithm has managed to steal a peek.

The Economists’ data science team with assistance from Columbia University political scientists Andrew Gel and Merlin Heidemanns have developed prediction models for the U.S. House, Senate and presidential race that conjoins national and state polls with polling, demographic and economic variables to forecast a range of outcomes—updating every day.

“They are all three [forecasting] models that are, to put it simply, based on a combination of polling results and what are called kind of “fundamentals.” So underlying political variables, which tend to influence election results,” explained The Economist editor-in-chief Zanny Minton Beddoes, when asked how the model functioned in an interview with Marketplace.

By simulating 20,000 possible paths for the election and each time varying candidate vote share to incorporate the margin of polling error, change in voter turnout and the equivalent effect of political environment and campaigning, the algorithm predicted the likelihood of ‘every plausible electoral-vote outcome’ (the outcome of the vote cast by the electoral college) and concluded that the Democratic nominee Joe Biden won 96% of the time, with the Republican nominee and current President Donald J. Trump winning only 4% of the simulated runs. 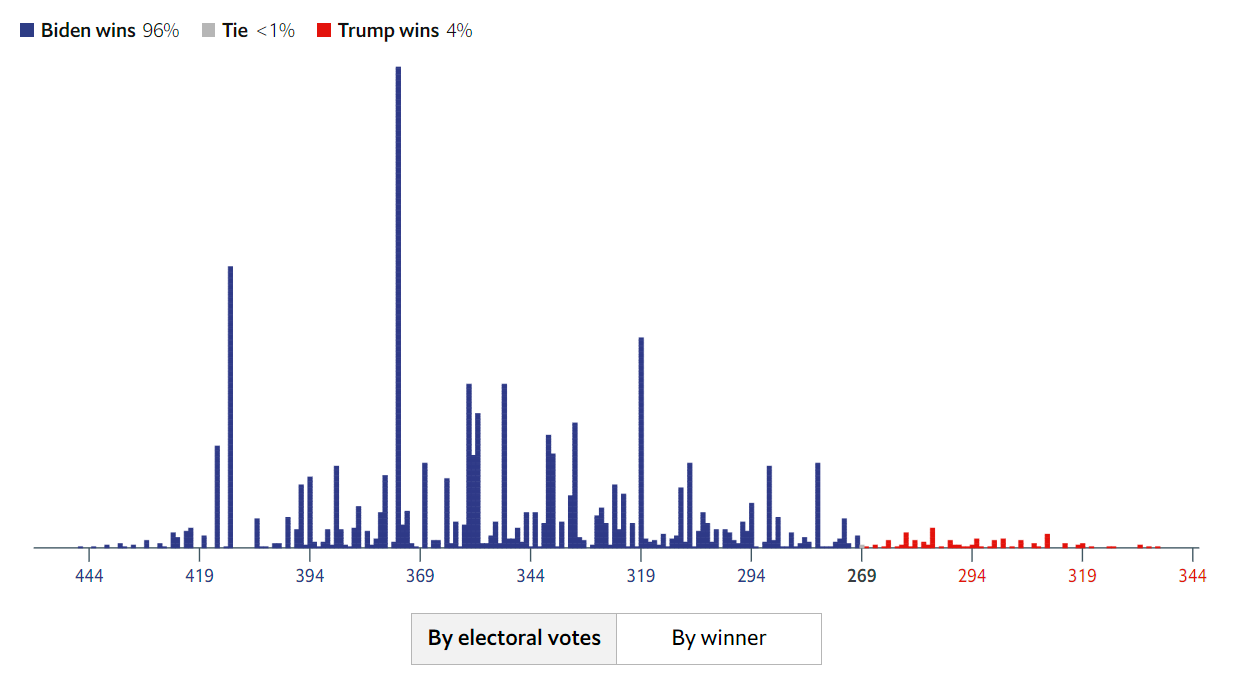 With the integration of political-economic factors at the state level, the model, through correlation, analyses states that are likely to have similar candidate preferences. For instance, the states comprising New England, i.e. Maine, Vermont, New Hampshire, Massachusetts, Rhode Island and Connecticut are all extremely likely to see a Democratic sweep.

Each state has a significant “tipping-point probability”, or the odds of casting the electoral vote for the winning candidate. This is the first metric that the algorithm utilizes in measuring a state’s significance in the elections. The second is the probability of a single voter casting the decisive ballot that wins the ‘tipping-point state’ of the winning candidate. At the time of writing, the algorithm has assigned a whopping 35% tipping-point probability to the state of Pennsylvania.

After averaging the polls, assessing them concerning their sample sizes and correcting biases such as overinflated support of one party over another, the model unifies forecast data to determine popular vote on each day. 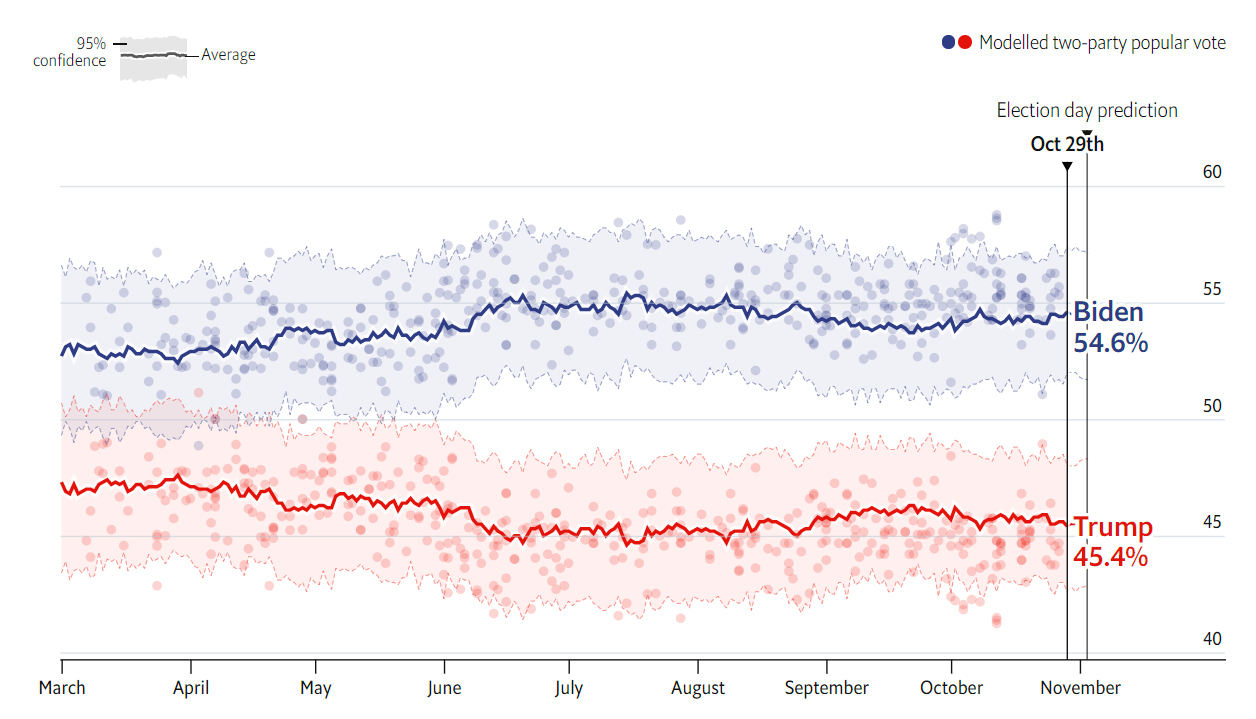 The model eliminates biases and probability of erroneous projections by simulating biased polls and conditions. The socio-economic, as well as socio-political similarities between states, are evaluated by demographic and political profiling—for instance, the share of white voters in a state, how urban or rural a state is, their religious sentiment, et al. 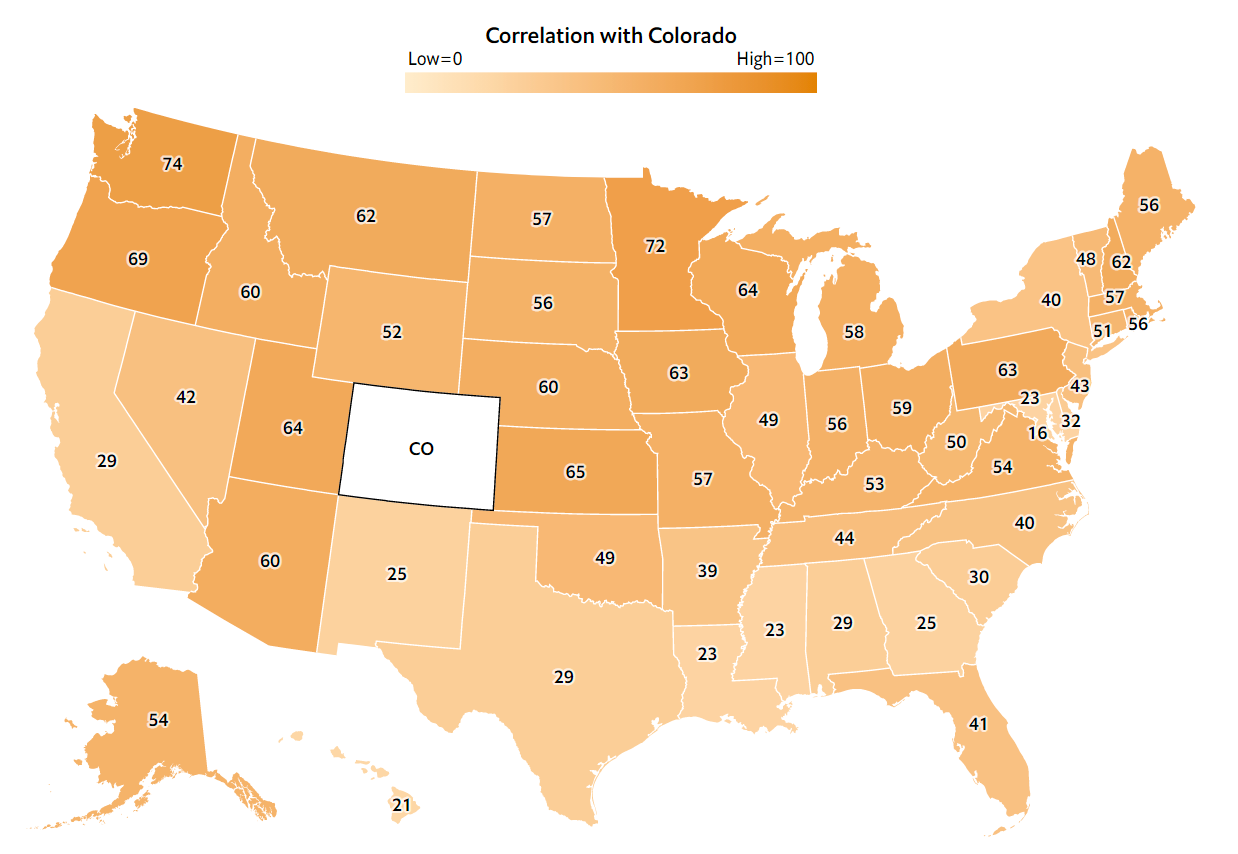 The numbers displayed indicate each state’s correlation with Colorado’s population based on set factors. (Image: The Economist)

The model predicts that Joe Biden is likely to thwart contemporary Donald Trump in the presidential race, but the most accurate prediction model will be the vote of the average American.

With the eyes of the world set on the U.S. election, it’s only a matter of time before the verdict arrives; and only America will determine who wins.

These days UX (user experience) and politics are closely intertwined. The reach of social media and online platforms only increases their power to influence politics and society. If you’d like help creating a coherent front-end for large volumes of data, or constructing a digital strategy to target millions, please get in touch and enquire about our user experience research and consulting services.