How far would you have to go to find a clean fuel that would fly modern jetliners and not lead to an irreversible climate catastrophe in the long run?

Not much further than the first element of the periodic table.

Aviation giant Airbus last week unveiled a triad of concept aircraft capable of achieving zero-emission flight by using hydrogen as a primary fuel, providing the much sought-after quantum leap in the path to the decarbonisation of commercial airliners, and the aviation industry by extension.

The three zero-emission hydrogen-hybrid aircraft, known under the moniker ‘ZEROe’ would be engineered to derive power from liquid hydrogen and hydrogen fuel cells.

The ZEROe family of aircraft would be equipped with Airbus’ modified gas turbine engines that generate thrust by burning liquid hydrogen as its primary fuel source, which would be complemented by a robust and highly efficient hybrid-electric propulsion system powered by hydrogen fuel cells.

Airbus estimates that aircraft emissions could be reduced by as much as 50% through its zero-emission technology.

“As recently as five years ago, hydrogen propulsion wasn’t even on our radar as a viable emission-reduction technology pathway,” elucidated Airbus’ Vice President of Zero-Emission Aircraft, Glenn Llewellyn.

“But convincing data from other transport industries quickly changed all that. Today, we’re excited by the incredible potential hydrogen offers aviation in terms of disruptive emissions reduction.”

Boeing’s European arch-rival is looking to enter its revolutionary class of ‘game-changing’ aircraft into service by 2035.

Here’s a glimpse into the aircraft that may signal the dawn of a green revolution in aviation. 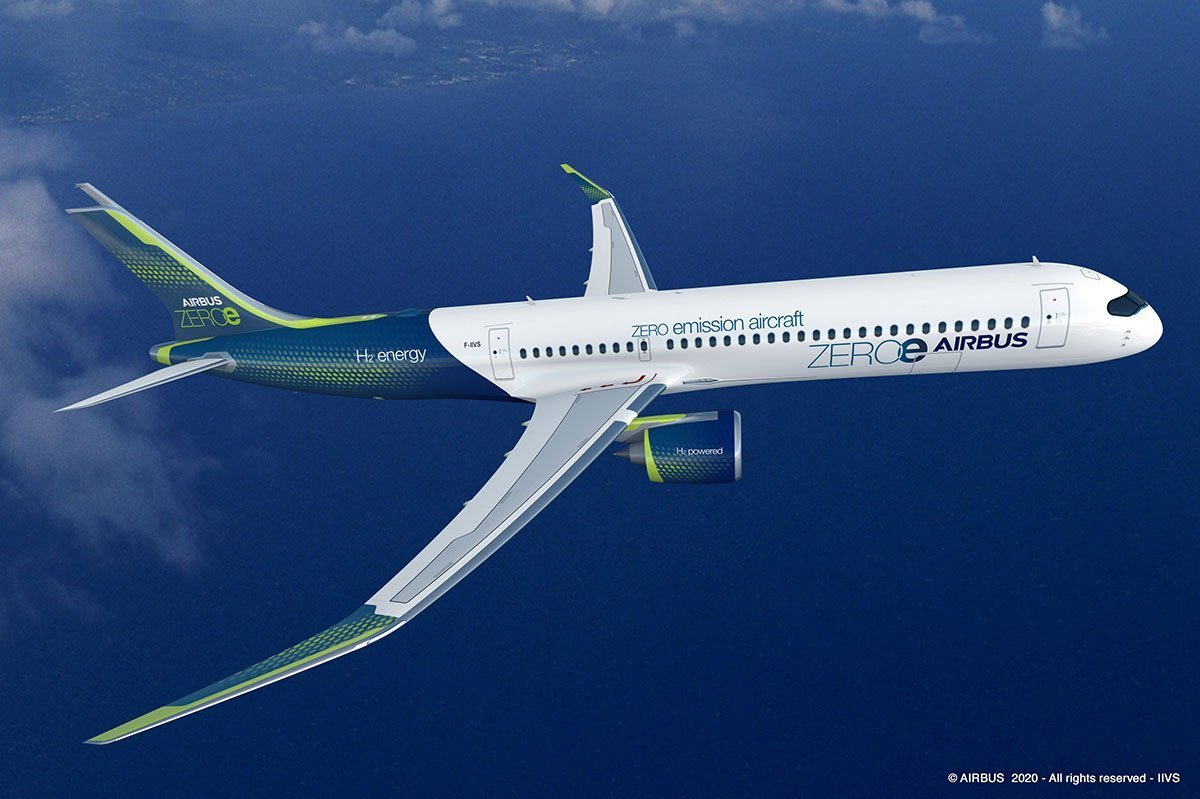 At a glance, the ZEROe Turbofan looks no different from an average A321 you’d see across the taxiway at the airport—but it’s inside what matters.

The ZEROe turbofan concept is a narrow-body aircraft equipped with Airbus’ proprietary gas-turbine engine powered by liquid hydrogen combustion. With a range of 2000 nautical miles (3704 km) the turbofan ZEROe could operate transatlantic routes with 120-200 passengers on board, saving their green conscience on long haul flights. 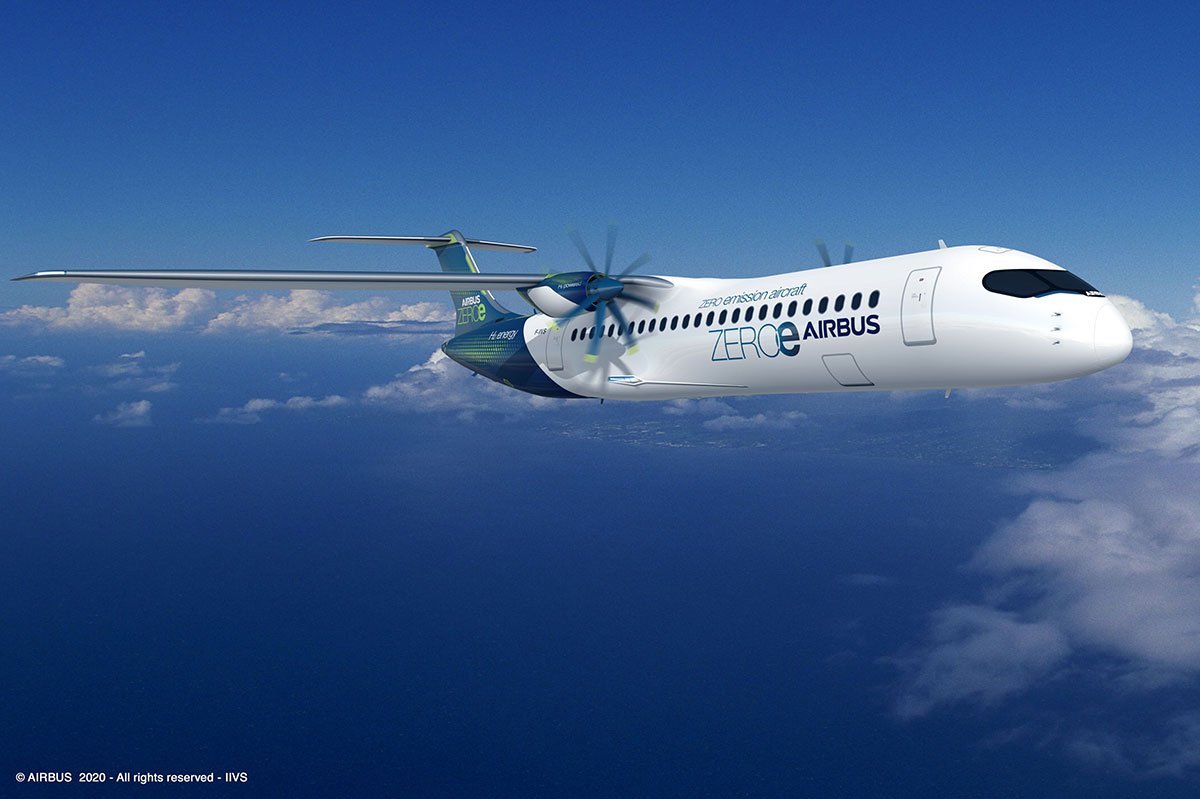 The ZEROe turboprop aircraft is the efficient, lightweight, single-aisle aircraft ideal for your short hop from Rome to Naples.

Equipped with a similar gas-turbine engine designed for hydrogen combustion, the ZEROe turboprop can make 1000 nautical mile hops, all while sporting it’s love for the environment (and for fuel economy).

The turboprop concept aircraft can have up to 100 passengers on board, all with an environmentally clean conscience and dirt cheap tickets. 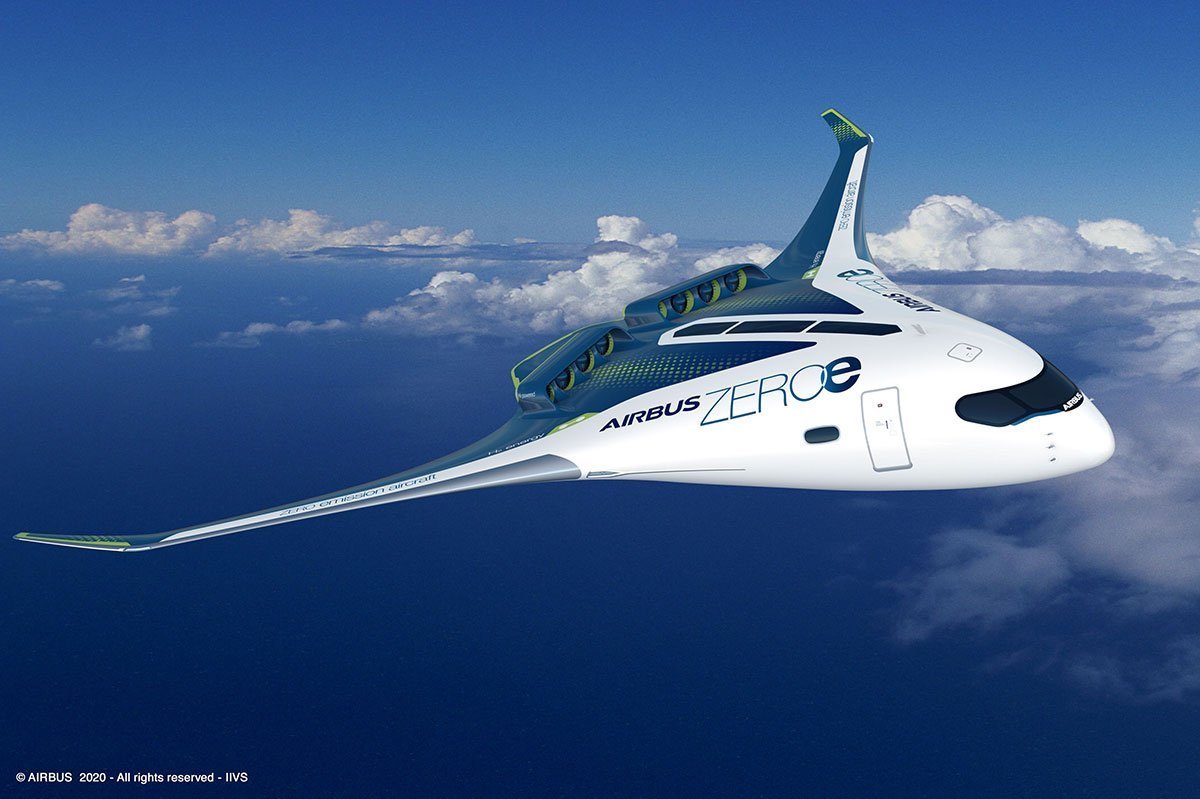 If the stark semblance to a Northrop Grumman B-2 Stealth Bomber evaded you upon looking at the Airbus ZEROe blended-wing concept aircraft, perhaps you should take another look.

There’s no need for a second look to tell you won’t be cramped up in your cabin for a little extra legroom in the ginormous cabin of a blended-wing ZEROe concept aircraft, but what’s noteworthy is the staggering number of options the aircraft provides for hydrogen fuel storage placement (thanks to the exceptionally large fuselage), fuel distribution and cabin layout.

According to Airbus, the blended-wing concept can transit up to 200 passengers and offer a range ‘similar to that of the turbofan concept’, which would mean the aircraft could operate on short as well as long-haul routes.

The aerospace giant is exploring several aerodynamic configurations to produce a mature design and layout of ‘the world’s first climate-neutral, zero-emission commercial aircraft’, a ground-breaking feat that just might save the world.

Vice President of Zero-Emission aircraft Glen Llewellyn affirmed the aviation company is expecting to invest ‘billions’ in the project, and that the work to realise the vision of the ZEROe is already in progress.

But the problem isn’t going from A to B. The entire dependency on fossil fuels is rooted deeply into many industries, as it has been since the first industrial revolution.

“The transition to hydrogen, as the primary power source for these concept planes, will require decisive action from the entire aviation ecosystem,” said Airbus Chief Executive Officer Guillaume Faury.

“Together with the support from government and industrial partners we can rise up to this challenge to scale-up renewable energy and hydrogen for the sustainable future of the aviation industry.”

The path to decarbonisation is a long and winding one, riddled with twists and turns, but is one that humanity must undertake to preserve their kind.