Augmented reality (AR) is set to become a major feature on the high-street, if industry predictions are correct. The technology, which is similar to virtual reality technology that has received a great amount of attention in recent years, has been adopted by a number of major companies.

However, the use of augmented reality technology could be more integrated, and more useful, in the coming years, as companies take advantage of its potential to improve the experience and efficiency of retail. In the short term, the benefits of augmented reality could be much more profound than those from virtual reality, which has previously dominated news coverage.

AR on the high street

A 2016 report on the future of shopping predicted that virtual reality and AR technology would significantly alter the high-street and warned that virtual shopping could take over from physical stores. However, the mood has become more optimistic in the past year. A study by Warwick Business School (WBS) found that retailers using AR apps could create a more satisfying experience for shoppers and increase visits to their stores. 41% of those surveyed said that they would be more likely to purchase from a retailer with a mobile AR app.

A few companies have begun experimenting with their own AR apps. The most prominent is Ikea, who recently released its app, Ikea Place, which lets users see how furniture will look in their home by superimposing a virtual image onto an image of their room. Another proposed-app would allow users to scan real-world furniture products, using technology like Google’s reverse image search, and find a similar selection on offer at Ikea. Both apps are designed to make shopping easier and less risky for customers with the hope that it will convince them to visit physical stores. 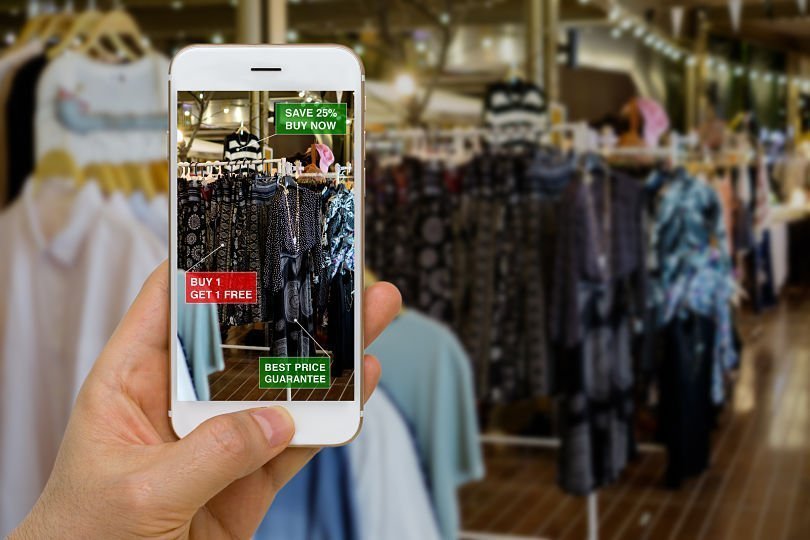 Could AR apps, like the developed by Ikea change the way we shop? Image Source : RocksDigital

AR is arguably even more helpful for luring shoppers back to the high-street with clothing and cosmetic products. For example, Google has recently worked with Gap on a virtual dressing room app that would let customers ‘try on’ clothing with a virtual shop mannequin that can be adjusted to their measurements. The app could help alleviate one of the major issues with high-street shopping, limited dressing room space and opportunity to try on clothes, and convince more shoppers to return to physical shops with a more satisfying and efficient experience.

Two other companies that have been experimenting with AR are Zara and Sephora. At Zara, they have developed an app that lets customers view models wearing selected clothes from the company, when they use their phones to hover over certain sensors in the store. At Sephora, the French beauty products brand, they are offering customers ‘virtual makeup’ and tutorials to let them test out a look before they purchase.

‘Virtual makeup’ superimposes the visual effect of a makeup product on a live image of the user’s face, which lets customers experiment with various different products easily and quickly. The company has also moved forward with new features on the app since its launch last spring with a colour matching tool that detects the skin tone of a customer and matches its makeup recommendations to their tone.

The future for physical shops and AR

There is sometimes a suggestion that technological progress is an enemy of physical stores, with more customers moving to online shopping and physical sales decreasing. However, AR is an example which shows how companies can use technology to enhance the physical shopping experience for customers. The growth of the leisure industry shows that customers are still willing to leave home but they need something to convince them to travel to physical shops. AR can convince them in two ways. Firstly, through the novelty of using AR applications and secondly, by giving customers greater choice and greater information on the products they are buying.

In WBS’s study, they found that 48.8 per cent of those surveyed were happier with their purchase after using a mobile AR app because these apps helped to increase customer-certainty that the products they were buying were the right ones. With a clearer idea of what they were buying, customers left more satisfied with their purchases. In this way, AR technology can give customers the choice and convenience of online shopping with the reliability and experience that comes from a physical store. Unlike virtual reality, augmented reality attempts to enhance our world rather than replace it and could have a more profoundly beneficial effect to our lives. It could also be the life-line that physical shops desperately need.

Rocking about the AR tree