It’s becoming increasingly obvious that very soon fully-automated vehicles will be hitting the UK’s roads, but will other drivers and pedestrians accept them?

Driverless vehicles will be the biggest change to transport since we switched from horse & cart to motorised cars. With this disruption comes problems, not only in getting the technology right, but in how we accept them into our daily lives.

Will we trust them? How will we behave around them? Will they enhance our cities?

These questions have only speculative answers, but a Greenwich-based project, GATE-way (Greenwich Automated Traffic Environment) has been running several different trials to explore them.

One of the potential barriers to AVs (automated vehicles) is how human drivers might change their driving behaviour with self-driving cars on the road. If a driver knows an AV is programmed to stop, will they drive more recklessly?

The project sought to test this out by having 60 participants complete 10 drives in a simulator, to compare the difference in behaviour if there were more AVs in the traffic for example.

The results of the test showed that participants were more likely to pull into smaller gaps in front of automated vehicles.

While this suggests they felt confident in the technology powering the self-driving vehicles, it also could foreshadow a riskier attitude to driving. If the automated vehicle is programmed to stop anyway, do the same precautions apply?

The report emphasises that actually, most decisions were still made on sound judgements of safety. Drivers aren’t fully aware or used to driverless vehicles yet, so may err on the side of caution still.

Only time will tell whether this holds true after greater exposure to automated vehicles.

A prototype shuttle, nicknamed ‘Harry’, has been navigating a 2km route around the semi-pedestrianised Greenwich Peninsula in an attempt to gauge public reaction to driverless vehicles.

‘Harry’ uses 3D laser range sensors to perceive his environment and track moving obstacles, and is designed to transport up to four people at a time – three passengers and a safety operator.

Members of the public are invited to log their opinions on an interactive map. Professor Nick Reed, academy director at TRL (Transport Research Laboratory) said: “It is critical that the public are fully involved as these technologies become a reality. The GATEway project is enabling us to discover how potential users of automated vehicles respond to them so that the anticipated benefits to mobility can be maximised.”

But how has the public reacted so far?

The map is awash with green – meaning most responses have been positive – with people citing the pod’s environmentally-friendly credentials and potential to reduce congestion.

Locals are also excited at the prospect of safer driving and reduced ‘road rage’, with one saying: “Improves safety for all around, and less human interaction would mean less rash decisions and less intentional deaths/injury by vehicles.”

However, there are concerns. Marked in red on the map, one commenter said: “I have yet to be convinced that they can stop in time when faced with a potential obstacle.”

Other concerns include questions over whether driverless vehicles could handle ‘unpredictable’ pedestrians or ‘aggressive’ drivers in a busy area.

While ‘Harry’ is a pod designed to transport passengers, GATEway have also been experimenting with transporting goods. 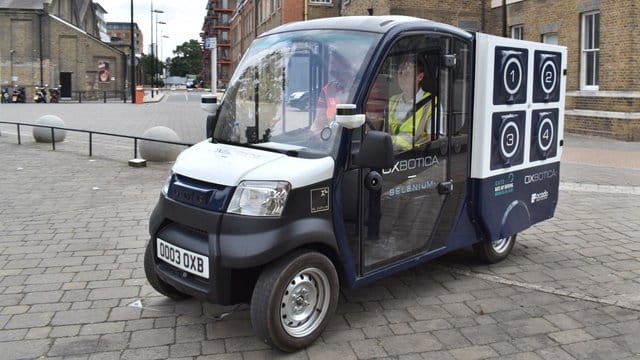 In a partnership with Ocado, an electric vehicle called CargoPod, has been delivering groceries in the area for the last two weeks. Large enough to hold 8 crates, with a top speed of 25mph, the pod focuses on ‘last mile’ deliveries, where access to larger lorries is restricted.

Simon Tong, principal research scientist for TRL, said: “We envisage that cities could benefit massively if deliveries could be made by quiet, zero emission, automated vehicles.”