Content to Cooking Stoves: Buzzfeed gets in on the hardware trend

Buzzfeed is making like Snap Inc and entering the world of hardware – but does it have staying power and why is everyone suddenly so interested in hardware?

Today marks the 2nd Birthday of Buzzfeed’s Tasty network. Despite still being in the toddler years, Tasty has grown to be the largest social food network around, averaging over 1 billion views a month.

It publishes impeccably organised recipe videos that some how make cooking look accessible to everyone. Even the most decadent of meals looks achievable when presented in Tasty’s easily digested format.

Now they’re about to become even more achievable with the announcement of their Tasty One Top, a bluetooth-enabled induction hob. 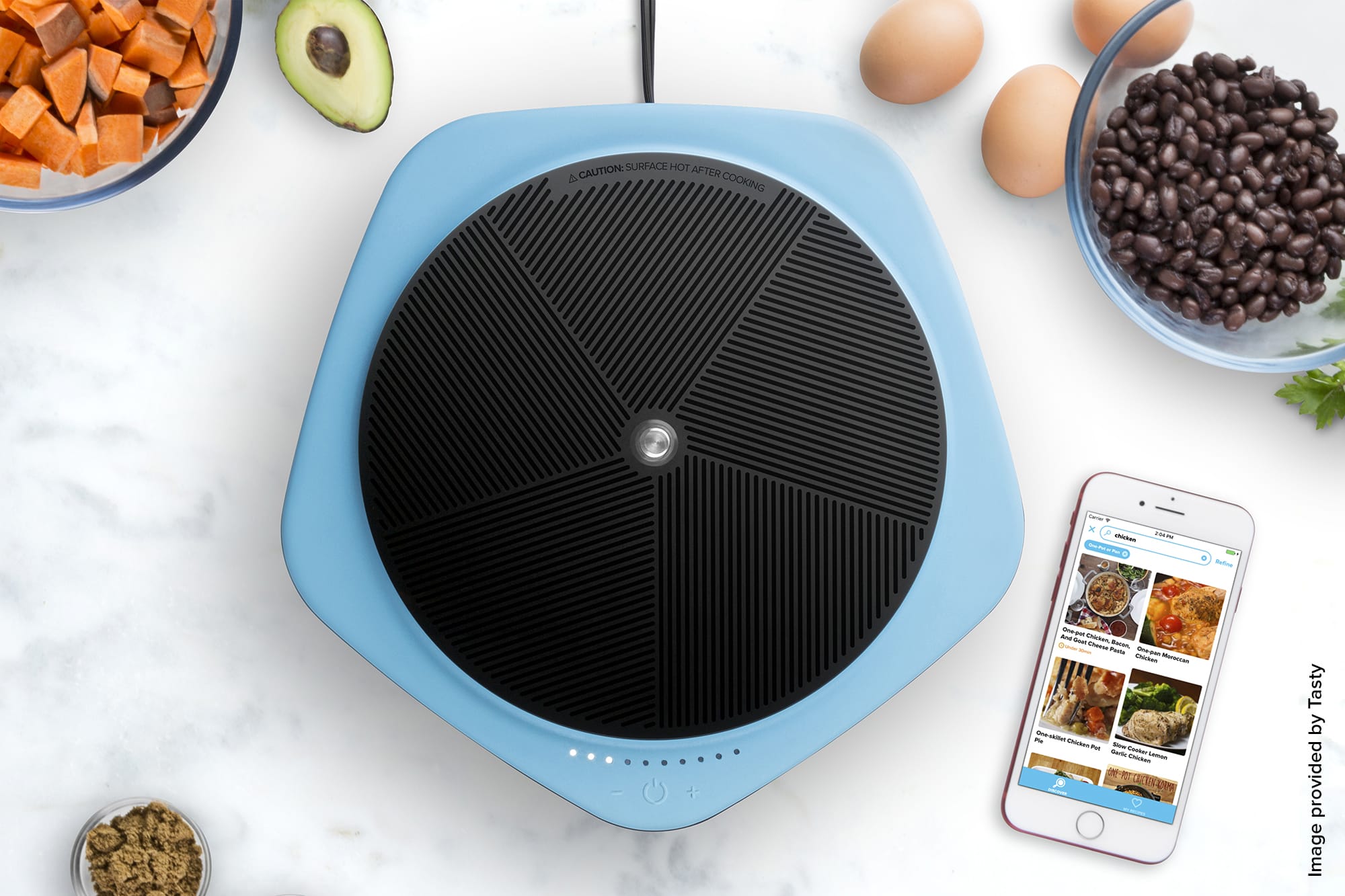 The hob links to the Tasty app, syncing temperature and times with the recipes – meaning the user just has to add and stir the ingredients at the right time. There’s no guesswork with that either – with the hob tracking time and temperature in real time, the app will tell you exactly when that steak needs flipping to be medium-rare, or when to add the veg to the stir fry.

It sounds like a dream for cooking newbies or those unconfident on the stove, but pros can also cook with it on manual mode.

Even the app alone improves on the user experience. NY Times’ Narhad Manjoo pointed out that the app solves many of the flaws that comes with cooking from such a short video: “Because the videos are so short (usually no more than 90 seconds), it can be a bit of a pain to actually make something from a Tasty clip. The app handily streamlines the process; click on a step in a written recipe and it plays just that step in the video.”

Tasty Manager Ashley McCollum said: “We built the One Top to bring the same point of view that Tasty brings into the kitchen every day – making cooking fun, exciting, accessible and less intimidating.”

At first glance it looks like they’ve achieved this. At $149, it’s half the price of the cheapest competitors and has something the other’s don’t – a content service that thrives on fun.

With millions of fans already, others would be hard-pressed to compete with Tasty’s gooey-chocolate and oozy-cheese aesthetics that’s had #foodporn-loving millennials hooked from day one.

Even the tech design fits the brand. Pentagon-shaped “because Instagram”, the hob brings the videos to life in the user’s kitchen. With a hob, they too can make clean-cut Tasty-esque videos of their tasty Tasty recipes.

While it makes sense as part of the Tasty brand on paper, like with Snap Inc’s Spectacles, only time will tell if the smart hob is a gimmick or something with staying power. 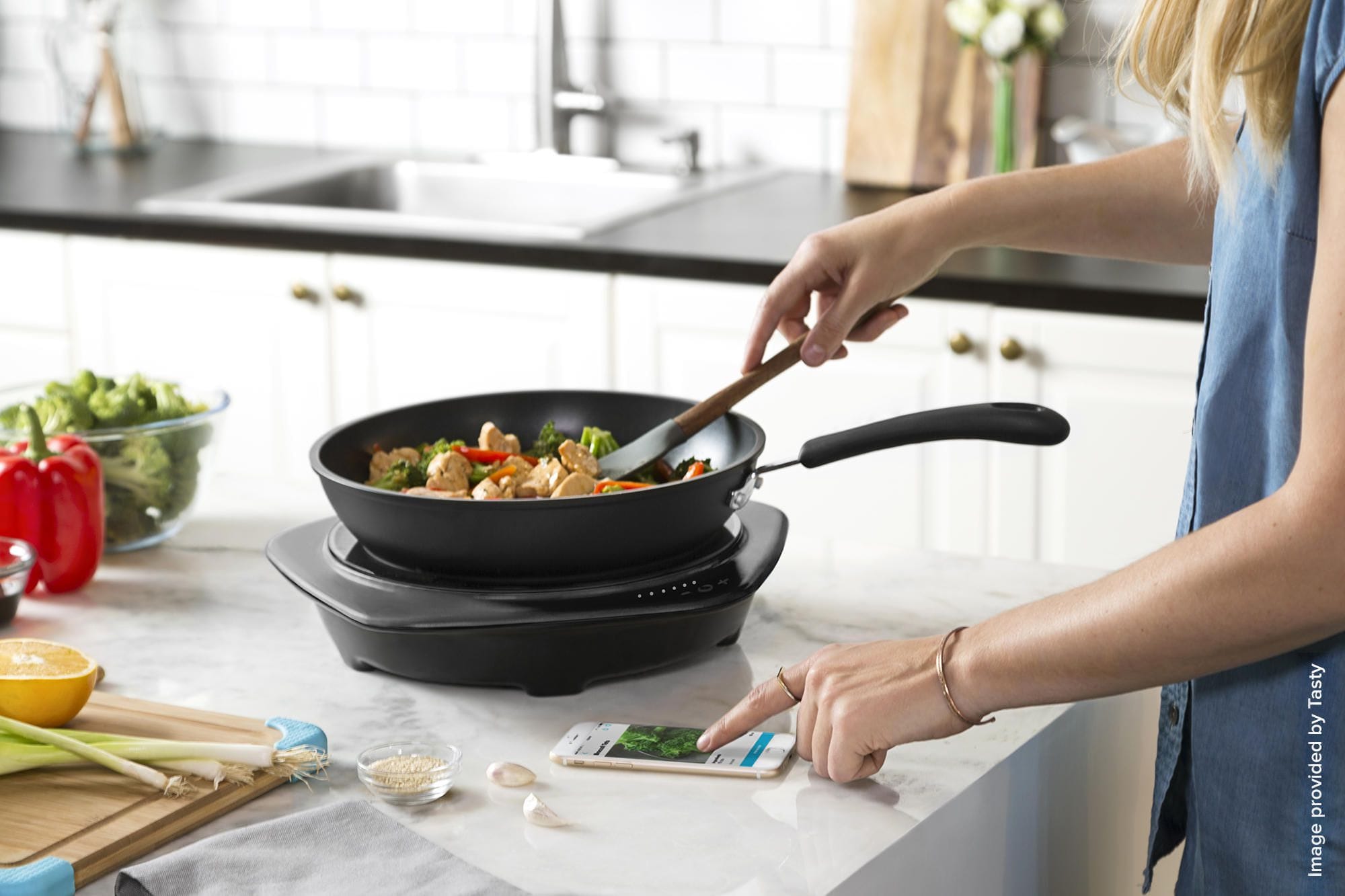 Buzzfeed is just the latest in a stream of companies making the leap from software (or in Buzzfeed’s case, content) to hardware – but why?

As we’ve seen with Amazon’s Dash button and smart speakers – hardware gets users to use your software. Snap Inc’s spectacles can only help increase the time spent on the app, just like Citymapper’s new bus will surely increase app downloads.

Plus, by designing everything from the software to the hardware, companies can have complete control over their user experience. Brands know who their users are and can adapt their hardware accordingly.

For example, Citymapper used its wealth of data to create a bus route needed by its users. Buzzfeed knows that the people watching their videos are likely to be the same type of people to use Instagram and so made their product the perfect aesthetic fit.

It’s a powerful trend, and one that makes sense when you consider that without an app-based service, IoT devices such as Echo speakers or Tasty One Top are just plain and simple things.

And it’s not about to stop. You can expect many other software companies to release their own hardware soon, with Spotify rumoured to be up next.