Caltech’s LEO Can Walk, Fly, Ride a Skateboard and Walk a Slackline

Land, air, and the slackline—Caltech’s new robot is a master of all terrain.

Caltech’s newest invention has accomplished feats not many other robots can boast of. LEONARDO (short for Legs Onboard Drone) is a neural network-powered drone that can walk, fly, ride a skateboard and can balance on slacklines—in a world where it’s hard to find a human who excels at all four.

Standing at just 2.5 feet tall, LEO exhibits a diversified set of locomotion characteristics, unlike any other robot. Supported by its small form factor, low weight and two leg thrusters controlled synchronously through leg joints, LEO can take flight when it is confronted by daunting terrain.

The bipedal robot was developed by the university’s Center for Autonomous Systems and Technologies (CAST).

The study on LEO has been published in the robotics journal, Science Robotics.

The corresponding author of the study Soon-Jo Chung talks about drawing inspiration from birds in urban habitats while engineering the robot.

“We drew inspiration from nature. Think about the way birds are able to flap and hop to navigate telephone lines,” the professor explains in a university press release. 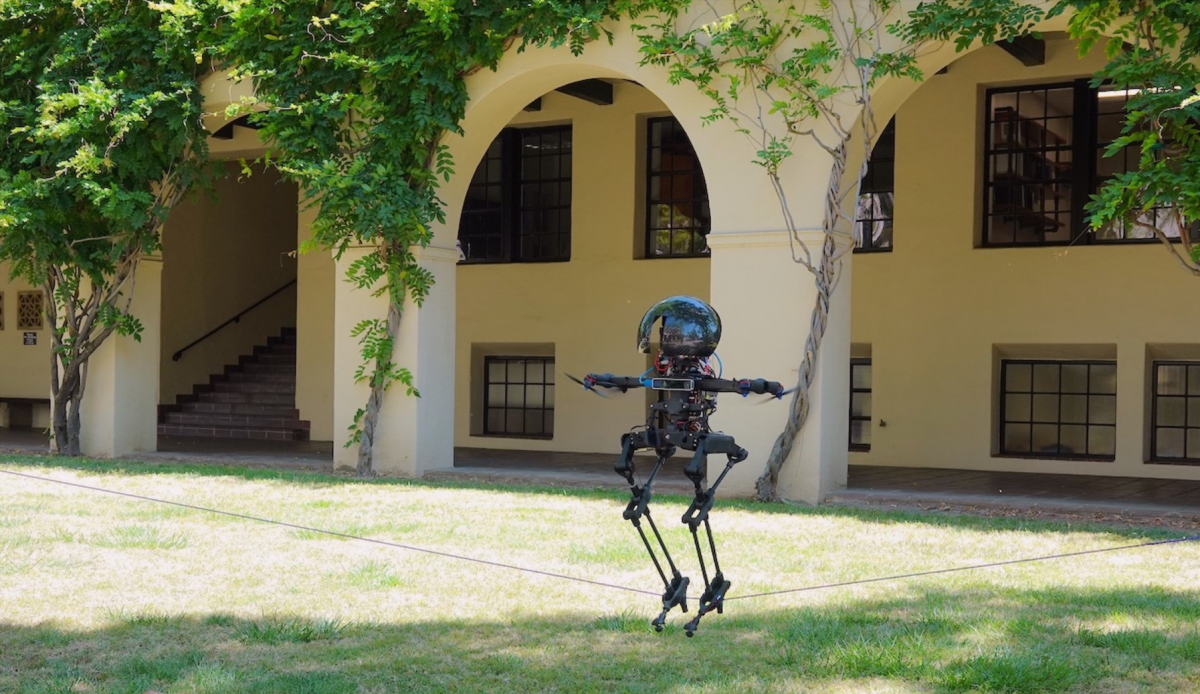 LEO attempts to walk a slackline in a test. (Image: Caltech)

“A complex yet intriguing behavior happens as birds move between walking and flying. We wanted to understand and learn from that.”

LEO’s rare exhibition of command over sophisticated movements come from its diversified set of locomotion features. The bipedal robot can prudently counteract unbalancing forces with its two thrusters that it uses to achieve flight.

“Based on the types of obstacles it needs to traverse, LEO can choose to use either walking or flying, or blend the two as needed. In addition, LEO is capable of performing unusual locomotion maneuvers that even in humans require a mastery of balance, like walking on a slackline and skateboarding,” explains the co-lead author of the paper, Patrick Spieler.

The researchers plan to help the robot achieve autonomy through deep neural network retrofits. Powered by Caltech’s proprietary drone landing control systems, LEO may be able to achieve autonomous flight, walk and other combinations of hybrid motion for movement soon.

The possible use cases of a drone that can walk and fly at will are limitless, but the most fascinating possibility is its deployment in Mars exploration. It doesn’t seem too thought too far-fetched because… there’s already a drone helicopter on Mars.

What one could achieve with LEO is limited only by imagination. If anything, the robot is typecast for the next Star Wars flick.