Citymapper has been granted permission by TfL to launch their own smart bus service – so what’s so smart about it?

Any traveller around a multi-modal city such as London will understand the value of an app such as Citymapper. Giving you a range of journey options, Citymapper tells you your ETA, the price of your journey, give you walking and cycling directions and much more – allowing you to choose the route that best suits your priorities.

While the navigation app doesn’t disclose user numbers, it’s safe to assume that thousands of journeys are made using the app everyday in London, if not more. That’s a lot of data, and Citymapper wants to use that data to create smart bus routes.

The CM2 will start running from late August-early September, operating between Aldgate East and Highbury. 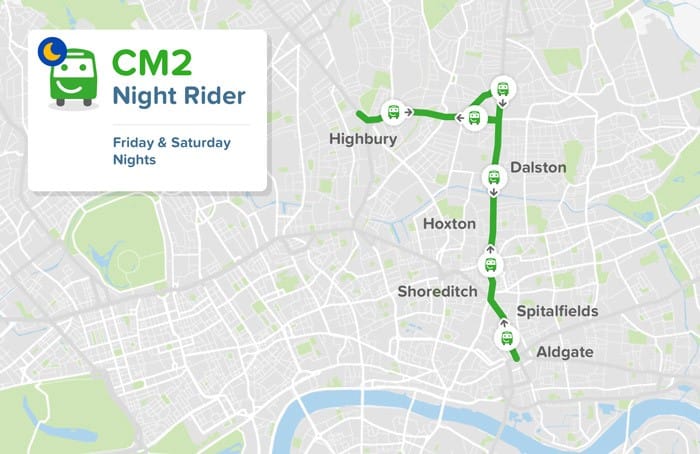 It’ll be a night bus service, passing through the hip, trendy areas of Shoreditch and Dalston between the hours of 9pm-5am every Friday and Saturday night. Why this particular route?

In a Medium post they said that while: “We found central London fairly well covered during the day by existing TfL services…we identified bigger gaps in the night network.”

Specifically, they found gaping holes in East London – while Highbury got the night tube, there’s a distinct lack of bus services connecting that area to the rest of East London. What’s more – that’s where night-time revellers were heading after their cocktails and hip-hop/jazz fusion club nights.

By creating a bus route that fulfils a demand, the CM2 is bound to be a success – that’s smart in itself.

But it’s not the only smart thing about this bus.

The green buses will have a smart display that tells you your location, what’s coming up next and how long it’ll take to get there. Though simple, it takes the anxiety out of the bus experience – answering those “Is my stop the next one?” and “How long is this traffic going to delay us?” questions.

According to Rob Boynes, product designer at Citymapper, the SimCity software responsible for finding the route in the first place would also be capable of figuring out flexible routes. The bus, for example, could respond to changing traffic or demand – this, however, might require a change in regulation.

Other smart bus features include anonymously monitoring seat availability and, perhaps most exciting of all, USB chargers at every seat. Being a night bus service, this will be most welcome.

There’s no word on pricing just yet, but travellers will be able to pay with contactless, Apple and Android Pay.

Intriguingly, they sign off hinting at a tempting surprise: “Lets just say that the bus experience is long overdue some change. And if you want to try it, you’ll have to make it to Shoreditch on a weekend night.”

Could it be some light bus entertainment, or perhaps a social feature? We’ll have to catch the next bus to find out.