The Middle East has always been a place for innovation and invention, and not many people realise just how many things we know and love today were founded there. For example, Abbas Ibn Firnas made the world’s first ever flying machine in 875 AD – a core necessity for the invention of the modern aeroplane. Dubai, a major Middle Eastern city that has built a reputation for futuristic technology, is just one example of how the Middle East continues to innovate. So, as part of our Down in Dubai: UX Inspirations series where we discover everything Dubai has to offer ahead of our team trip, we thought we’d list some of the most exciting, albeit slightly ridiculous, tech innovations you’d find over there!

First launched in 2017, the Dubai Police ‘Robocop’ is a life-size robot, dressed in the Dubai Police uniform. Able to shake hands and perform the military salute, it was implemented as part of technological innovations made to improve services and security ahead of Dubai hosting Expo 2020. It is the first automated policeman in the Middle East, and is equipped with cameras and facial recognition software – it can even compare faces with a police database, and flag any matches. Members of the public can also make use of the robotic policeman, as they are able to report a crime using a touch screen computer embedded in its chest. If regarded as successful, it will hopefully make up 25 percent of the Dubai patrolling force by 2030!

Though only a short trial was carried out, we thought we’d add to the list the Costa Coffee drone-drop, known as the ‘Coffee Copter’. Following a survey that showed 82 percent of its UAE customers would be open to receiving beverages using this technology, the Costa on Jumeirah Beach Road implemented it. Customers were able to order their favourite drinks, and once they had been made by the baristas, they were sent on their way to the beach using a specially engineered drone! Costa hasn’t rolled out the technology since the trial back in 2017, but perhaps we will spot one if we’re lucky! 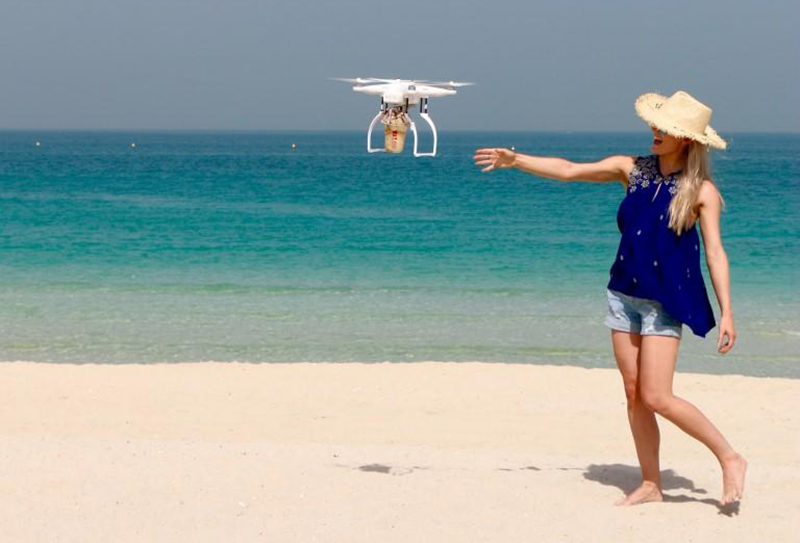 Another incredible innovation being set up in Dubai is the Mars Science City, a platform for a future space robotics lab, analogue facilities, a habitat and a space sustainability lab. Housing a space museum, the project is said to be a celebration of the greatest achievements of mankind in space exploration. It aims at educating visitors through displays in museums and amphitheatres. The campus will also include laboratories to imitate the life and human occupation on Mars, taking the advantage of 3D printing technology and radiation. The Prime Minister of the UAE, Sheikh Mohammed bin Rashid Al Maktoum, said “we have confidence in the probability of space exploration, we would love to collaborate universe leaders to be able to funnel the findings of the research and activity that meet people’s needs and improve their standard of living on the planet”. In the last update on the project, it was said that the design stage is almost finished, and the next two years will be spent building it, with the aim to open by 2024!

Dubai is aiming for 25 percent of all transport to be through self-driving vehicles by 2030, and with that, the technology for autonomous air taxis was born. With test flights beginning back in 2017, the flying drone has 18 rotors, and prides itself on its eco-friendly, electrical-powered nature. The technology was created by Volocopter, which announced earlier this year that they had raised $55 million in funding, which will finance the commercialisation of its “VoloCity” air taxi. With plans to get them rolled out within the next few years, it may soon become reality that people of Dubai can catch a ride on a self-driving helicopter.

One last outrageous innovation you’ll find in Dubai is the Floating Seahorse Villas – a group of purpose-built villas that are partially submerged in water around the Dubai World Islands. These islands are shaped to look like a map of the world, and the Floating Seahorse finds its home in the area known as the ‘Heart of Europe’, neighbouring islands such as the Netherlands, Germany and Sweden. The bedrooms are underwater, allowing you to sleep around the local sea life! The villas are a hybrid between a stationary house and boat, anchored to the ocean floor after being put in place by construction cranes. First put in place in 2020, the project aims to one day be home to 131 floating villas.

We can’t wait to see an experience all Dubai has to offer, maybe even including some of the things on this list! Though we have spoken about some outrageous (yet, incredible) innovations, we do appreciate that Dubai is so much more than these. Keep an eye out for our other Down in Dubai: UX Inspirations posts to get an even better understanding of exciting Middle Eastern innovation!

UX Connections’ Trip to Dubai!
The User Experience of Emirates
UX Connections’ Dubai Bucket List
Why choose UX services from UX Connections?
Dubai Design Week 101: Everything You Need to Know
How the Middle East is Becoming an Innovation Hub
Going Global: The UX Connections Team Takes Dubai!
What the Future Looks Like for the Fashion-Tech Industry
NFTs: The Developing Relationship Between Fashion and Tech
How the Fashion Industry Continues to Develop its User Experience
Future Trends and Innovation in the Automotive Industry
As AI Grows, So Must Our Code of Ethics
Sydney’s rainiest year to date – UX Connection’s commitment to limiting consultant’s contribution to global warming
Australian Automotive: Incredible Innovations
Worldwide Automotive: Motor Shows
Worldwide Automotive: The Ownership Experience