Refugees: from homeless to housed in 24 hours

Rollable concrete fabric forms the structure of flat-pack housing that will provide shelter for refugees in just 24 hours.

According to the non-profit global charity CARE, there are 70 million refugees worldwide. Legally, the United Nations (UN) recognises only 25.9 million of those people as refugees. Internally displaced people, stateless people, and asylum-seekers make up the rest of the 70 million people. These people find themselves without a safe place to call home and without the same rights as legally recognised refugees.

Whether fleeing war, violence, persecution, or environmental disaster – morally and ethically – people have the basic human right to the fundamentals of survival. Shelter is a necessity for survival, but for refugees, finding adequate shelter is a frightening challenge.

In the midst of seeking sanctuary in a new location, refugee camps are hastily erected and often poorly equipped. The camps are notoriously unsafe, particularly for women and children. In January 2019, the Lesbos refugee camp in Greece came under criticism from Oxfam. Women at the camp reported that they were too frightened to use the camp toilets at night, and that new mothers were housed in tents just 4 days after undergoing caesareans at hospital.

The NSPCC found that, between August 2016 and November 2017, children in refugee camps were being subjected to abuse, violence, and trafficking. Children as young as 9 years old, who had travelled alone to find sanctuary, were going missing from camps and little was being done to find them. A safe home for refugees is clearly a must.

Food, medical supplies, and compassionate authorities are similarly important. But secure housing can provide a traumatised family with a sense of stability, warmth, and comfort at a time when they have little to call their own.

Thankfully, design geniuses with hearts of gold are putting their know-how to good use and offering up innovative solutions. Cutwork architectural design studio are currently developing the project Cortex Shelter, a flat-pack house made of concrete fabric. Cutwork claim that the house can be erected by two people within 24 hours, without the need for technical skills or heavy machinery. 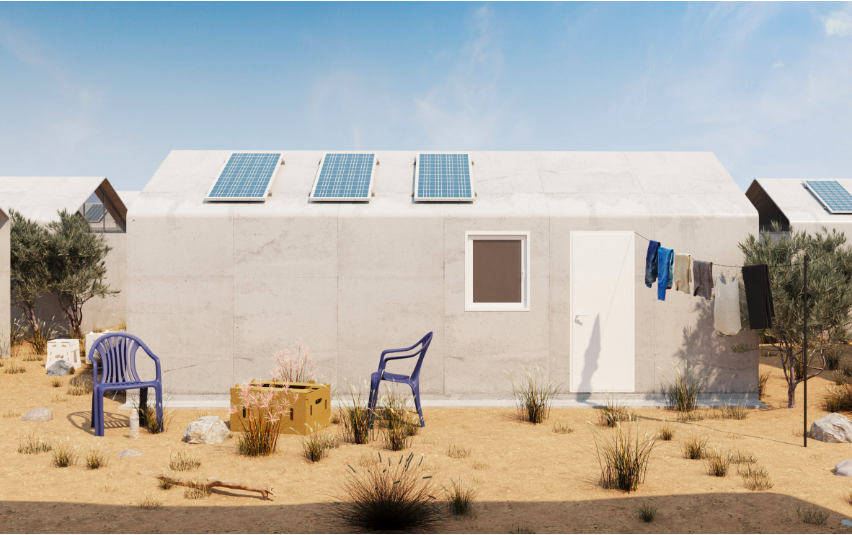 Inside, there is space for families of 4-6 people. Families will have access to their own bathroom, which has a dry toilet alongside an off-grid shower and sink. Solar panels can be fitted to the roof, providing families with power for light and cooking. In the Lesbos refugee camp, people resorted to burning plastics – and anything else available – to create fires for warmth. In the Cortex Shelter, washable insulation panels line the walls, providing greater warmth and comfort than found in tents. 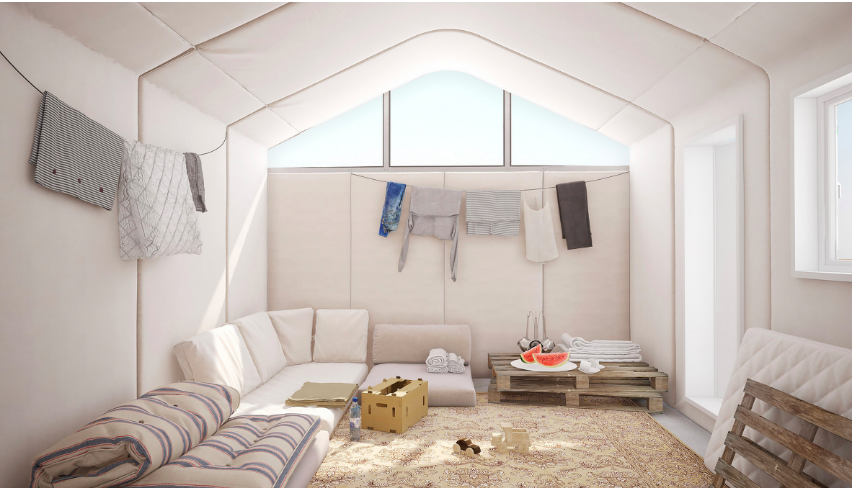 Cutwork hope to rid refugee camps of their temporary status and provide housing which can grow into stable settlements and even into permanent cities. This may provide hope to families and individuals who find themselves fleeing from their old lives and desperate to find sanctuary. The impermanence of refugee camps and the terror and trauma of the inhabitants means that safe, secure structures – a place to call home – is not a luxury but a must.