The autonomous boats of the roundAround project are demonstrating how science, technology, and design can combine to meet urban challenges.

The city of Amsterdam is synonymous with historic canals and an open culture. The city is also a hub of ingenuity, with Amsterdam being named the 2016 European Capital of Innovation by the European Commission. It is here, in this vibrant city, that MIT Senseable City Lab and Amsterdam Institute for Advanced Metropolitan Solutions (AMS Institute) are testing out their Roboat technology with the roundAround project of autonomous boats.

Amsterdam City Centre and the up and coming area of Marineterrain Amsterdam are separated by a waterway that engineers have been struggling to bridge. The waterway is a fixed mast route for larger boats so any permanent bridge would have to be extremely high, which would be very costly to construct. MIT and AMS Institute are trialling a possible solution – autonomous boats that move continuously across the canal in a circular 2-minute journey connecting commuters with the city centre.

The self-sailing boats operate between two unmanned docking stations. Commuters access the docking stations by following a ramp down to water-level and wait in a seated area that also provides real-time information about the Roboat project. The electric-powered boats slow as they reach the docking station, allowing passengers to board before moving off again. Equipped with cameras and laser scanner technology (Lidar), the boats use autonomous algorithms to detect and respond to obstacles by changing course, whilst communicating with the other boats to avoid collisions. On board, the boats have touch-screen monitors that allow emergency contact should something go wrong. 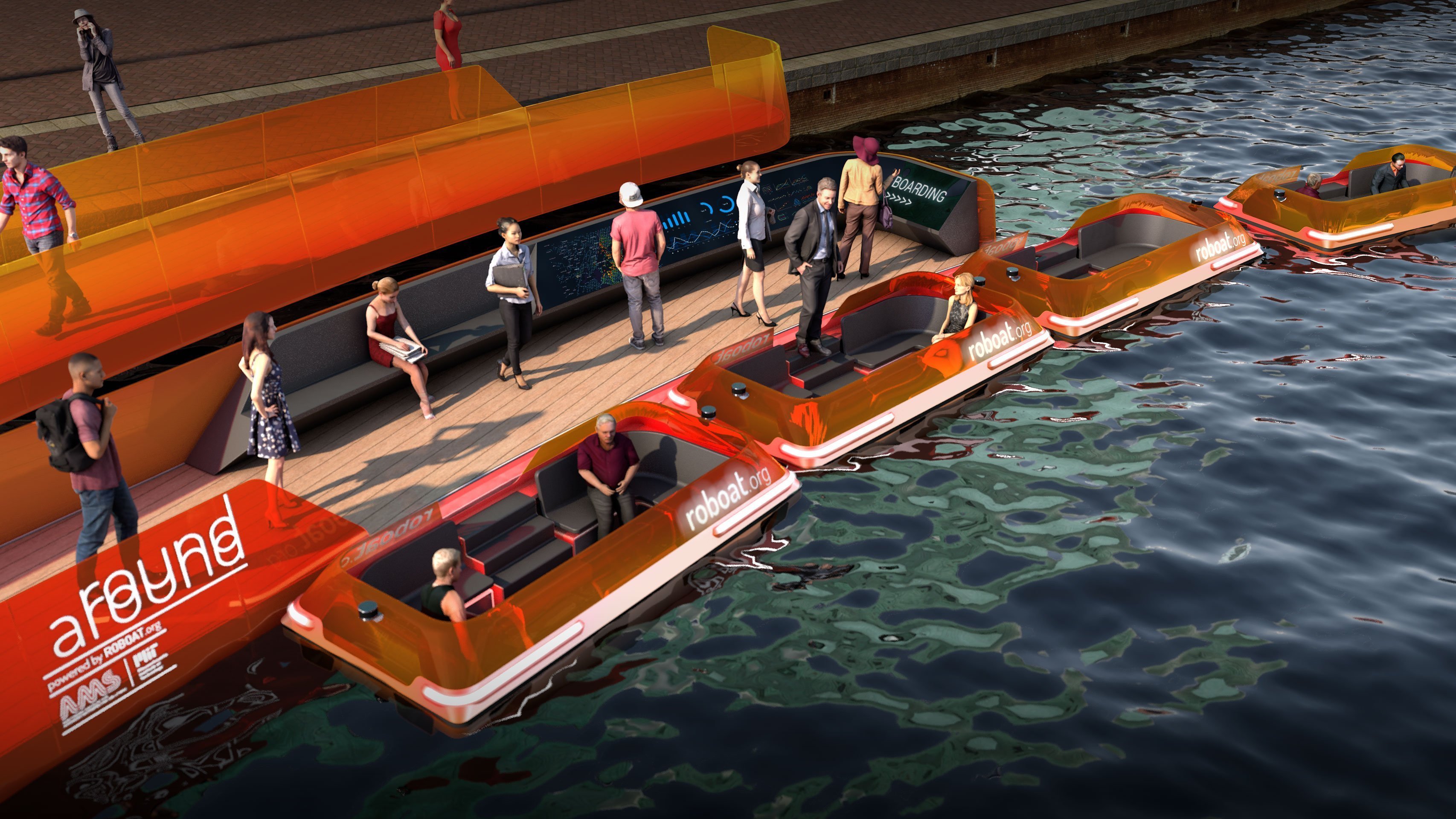 Currently, the boats have been designed with steps, so it is not clear how wheelchair users or families with pushchairs would access this form of transport. But at this stage, roundAround is just a prototype. roundAround’s AI technology will learn from and adapt to its environment. This knowledge will then be used to scale the project for other cities and for alternative functions. MIT have suggested that the technology could be adapted for use as autonomous tug-boats or for rubbish collection or package delivery.

Since a primary concern is making the Roboat technology human-friendly, part of the research involves using virtual reality (VR) to learn how people interact with the autonomous boats. VR workshops were held in Amsterdam and Cambridge, Massachusetts this year. The activities enabled participants to look at not only Roboat’s immediate function but to explore how autonomous transport might impact urban planning, design, and governance in the future.

The Roboat project website also offers the chance to view the Amsterdam canals from Roboat’s perspective via the Lidar technology. Or if that’s not enough, apps can be downloaded so the curious can explore Roboat’s potential through augmented reality. MIT and AMS Institute are making use of various interactive tech so the public can immerse themselves in the research as it evolves.

As it is intended to be a scalable project, the innovative roundAround design could provide relief for other cities with waterways by removing traffic from congested roads. roundAround also offers a way for newly developed areas to connect with main city hubs to encourage integration.

The roundAround projects fits neatly into the AMS Institute’s Smart Urban Mobility agenda, ensuring that expanding populations in bustling metropolitans have access to environmentally friendly transport. The aim is to get people out of polluting cars and into public transport, autonomous vehicles, shared mobility, and using bikes or walking. Smart Urban Mobility means (re)designing not only transport infrastructure but entire public spaces.

Similarly, MIT’s Senseable City Lab works with engineers, social scientists, physicists, designers, planners, and biologists in an omni-disciplinary approach to learn about cities. Just as massive amounts of data about people is shaping our social world, the vast amounts of real-time data produced by cities is shaping the future of urban design.

The roundAround project is just a small part of a sprawling investigation into the future of urban life.