The ‘Seabin’ that could reduce plastic pollution in UK ports

Campaigners in Bristol have put their money behind an Australian technology project to clean up the city’s harbourside area, raising money to buy a ‘Seabin’. The product, which is a ‘floating debris interception device’ (or simply a bin), is designed to be used in marinas, ports or any area of water with a calm environment. Its inventors hope that it can solve the problem of plastic pollution in local sea ports.

The Seabin is placed in a marina or port and works by sucking in water and collecting any rubbish in a catch bag inside the bin. After this, the water is pumped back into the marina/port with the litter left in the catch bag to be removed later. The Seabin can hold up to 20kg of rubbish before it needs to be emptied and it is projected to be able to catch 90,000 plastic bags and 16,500 plastic bottles per year. 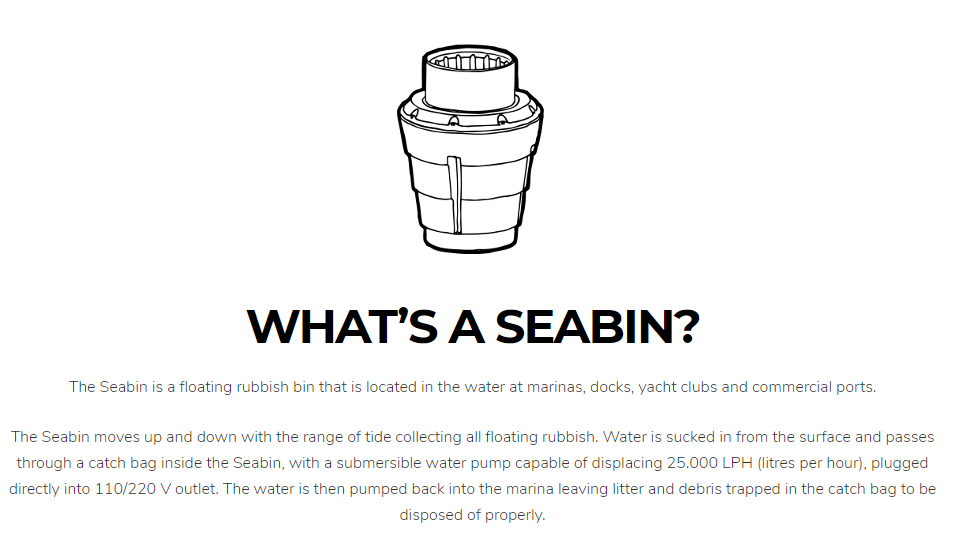 What is a Seabin? Source : seabinproject.com

The Seabin for Bristol Campaign hoped to raise £3000 to buy one bin but reached over double that target last month and are now planning on buying two Seabins for the harbour. The campaign, which has received the support of Bristol City Council, hopes to reduce the problem of littering in the harbourside area and stop plastic entering the River Avon and travelling out to sea.

However, while the Seabin seems like a perfect solution to a serious environmental problem, it does have its drawbacks. Most notably, its price is a major barrier to entry for some communities and its use is limited because the Seabin needs to be in a calm environment; you can’t put it in the middle of the ocean. Seabin CEO Pete Ceglinski has said that he hopes to get the product working off-shore by 2027.

Others have expressed concern over the product’s electricity usage and question whether the power needed to run the pump all day is worth its benefits. Speaking to CNET, Ceglinski sought to ease those fears saying, “it uses 500 watts and it’s only drawing 4 amps, which means it’s quite a low energy consumption and it is adaptable, so we can have it run by either solar power, wind power or wave.”

He also spoke about future developments with the Seabin, such as adjustments to the filter that would allow it to catch smaller plastics. “We have developed a filter using a finer mesh, where we’ve been catching microfibres; plastics that you cannot see with the naked eye,” he told CNET.

“We have developed a filter using a finer mesh, where we’ve been catching microfibres.”

Interest in the Seabin has come after increased concern over pollution in the oceans in recent years. Last November, Michael Gove, the UK Government’s Environment Secretary, said that he was “haunted” by scenes from the BBC’s Blue Planet 2 series, which showed the damage to oceans from plastic pollution. Earlier this year, he suggested some anti-plastic proposals that could reduce waste, including a ban on plastic straws and a tax on plastic bottles.

Bristol is not the only city experimenting with the Seabin. According to Ceglinski, customers from around 70 countries are interested in the product. Portsmouth harbour installed the UK’s first Seabin in October last year and there are plans for the product to be introduced at Tutukaka Marina in New Zealand and Santa Margherita Ligure in Italy.