The future is AI.

The detailed new report from leading accountancy firm PwC has suggested that the rise of AI will boost the global economy, and create new jobs as old ones are lost.

PwC estimates that the technology will be a ‘key source of transformation, disruption and competitive advantage’ and could see $15.7tr added to the global economy by 2030 from AI. That figure is greater than the output of the Chinese and Indian economies combined.

Some famous experts and voices, such as the late Stephen Hawking and Tesla boss Elon Musk, have been keen to voice their opposition to the autonomous technology.

Stephen Hawking at opening of CFSI AI thinktank – 'powerful AI will be either the best, or the worst thing, ever to happen to humanity' pic.twitter.com/ux0mVRRA8D

If you're not concerned about AI safety, you should be. Vastly more risk than North Korea. pic.twitter.com/2z0tiid0lc

AI has quite a few meanings, with different functions and pros and cons.

Instead of replacing the labour force, as many have speculated, the report goes on to suggest that many benefits of AI will be centred around optimising and productivity improvements.

PwC suggests that over 50% of the GDP gains from increased utilisation of AI will come from improvements to labour productivity.

However, the report does says there are likely to be ‘winners and losers’ as different industries see significant changes due to the technology.

The United States and China stand to gain the most from the use of AI. With their economies growing 14.5% and 26.1% respectively. PwC suggest that America will be quickest to latch-on, but that China will benefit more the in long run.

Healthcare was among the main industries highlighted by the report that could benefit from AI. The technology could be utilised to improve diagnosis, imaging technology and disease outbreak tracking and prediction. 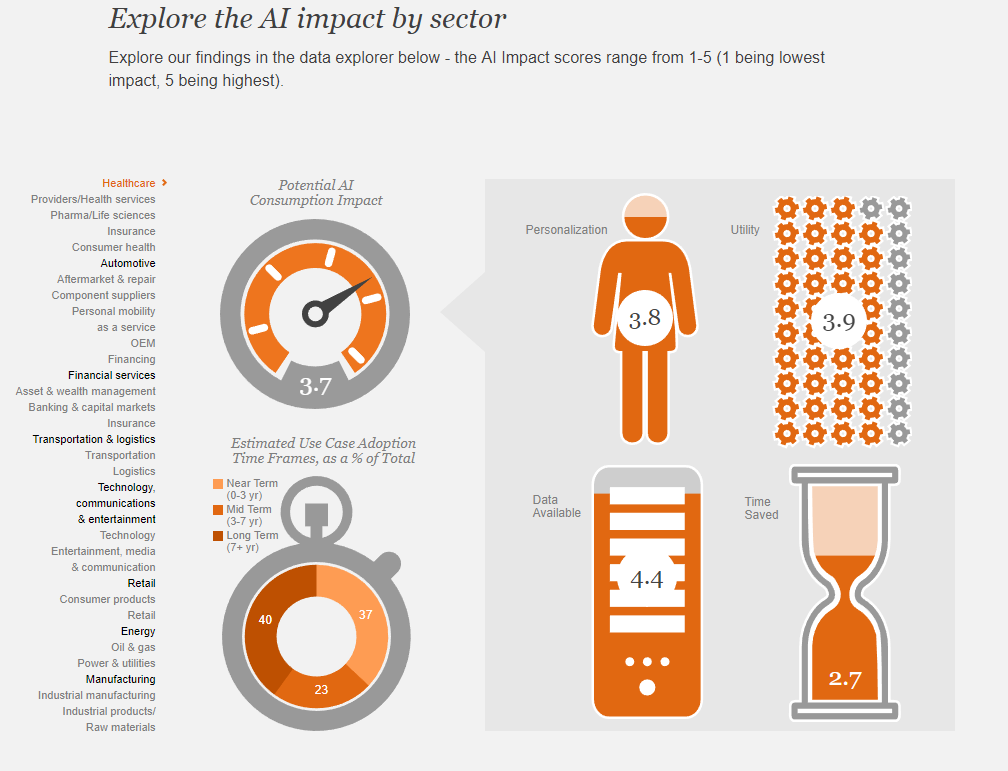 Healthcare was one industry highlighted in PwC’s report that could benefit from AI.

The financial sector could also stand to gain, from personalised financial planning, to better fraud detection and anti-money laundering. The industry is also one where the automation of basic tasks could handed over to AI to improve productivity of back office tasks, as well as customer facing operations.

PwC generated the reporting using a ‘ large scale dynamic economic model of the global economy.’ Their model was based on the Global Trade Analysis Project database, which provides data on 57 different economic regions, and how these regions interact by trade and supply chains.