Uber revolutionised the taxi service with its super sleek UX and innovative concept. But as we stand on the verge of saying goodbye to the app in London, the dark side of Uber has come to light.

For many Londoners, Friday brought terrible news. TfL will not renew Uber’s cab license – meaning that in a few months, convenient and cheap rides could be no more. The app completely disrupted the taxi industry, much to the chagrin of traditional black cab drivers everywhere. Cheaper, safer*, and far more convenient, Uber seduced 40,000 drivers and 3.5 million regular users in London alone over to their app. It wasn’t even just the taxi industry that Uber made waves in. The whole idea of pressing a button and getting a ride changed our expectations of the world and the way we consume. From Uber came similar models – Airbnb, Deliveroo and many more. However, 2017 has been an increasingly bad year for Uber – rife with controversy, accusations and a dark, manipulative side to their UX. But what can we learn from them?

The ‘magic’ of Uber, to not shy away from clichés, lies in the simplicity of it’s UX, or rather – the way it makes something very complex, seem simple for the user. The complicated logistics of connecting rider to roaming drivers (imagine how much more complicated this gets with UberPool) is hidden behind a clean, intuitive interface. The user simply presses a button and, as if summoned with sorcery, a car will appear.

From start to finish the process is frictionless, and even fun. Garret Camp, co-founder, first had the inkling of idea when watching Casino Royale. In the film, James Bond is driving and glances down at a graphical image of his car moving towards his destination. This image made its way into the centrepiece of the app’s experience. Users can watch their car head over to pick them up, and monitor their journey. Not only is this entertaining, but it keeps the user in the loop – at no point is anyone left unaware of what’s happening. This alone is a vast improvement on the mystery of an ordered cab. Is it on it’s way? Is this really the most direct route? That’s not to mention the safety aspect. While this has been debated furiously (opposers citing poor background checks and the concealment of criminal offences) – there’s no doubt being able to track and share your car’s journey with a friend or family member is a reassuring feature, one that’s missing from taking a traditional black cab. Passengers rate drivers, drivers rate passengers. This is, again, a reassuring UX feature and also ensures the positive user experience is carried over into the physical experience of riding and driving the taxi. If both you and the taxi driver are under scrutiny, it’ll encourage mutual good behaviour and a nice ride for all.

Yet friction does exist within Uber – that is, between the app and its drivers. To combat it, Uber adopted a dark side to its sleek and shiny UX. While the UX that faces the consumer could do no wrong, drivers face manipulative patterns. The less cars on the road, the more business (and money) the drivers can get. The more cars on the road, the more money Uber can make. And as each driver can pick and choose when they want to work – there’s no guarantee enough cars will be on the roads when they need them. This lack of control could jeopardise a company whose sole aim is to transport as many people as they can, 24/7. So to keep more drivers working longer, they started experimenting with dark UX, including a UX strategy called gamification. Using video game techniques, drivers are psychologically manipulated into extending their driving hours. For example, messages of encouragement will pop up at certain points – whether that’s halfway to achieving their 25-ride signing bonus, or to tell the driver they’re close to earning a target sum of money – “You’re £10 away from earning £100, are you sure you want to go offline?”. These messages are warm and positive, but are lifted straight out of the video game user experience. Encouragement towards a concrete goal motivates people to keep going, and it’s addictive. Chelsea Howe, a video game designer, told the NYTimes that: “It’s getting you to internalise the company’s goals…Internalised motivation is the most powerful kind.” 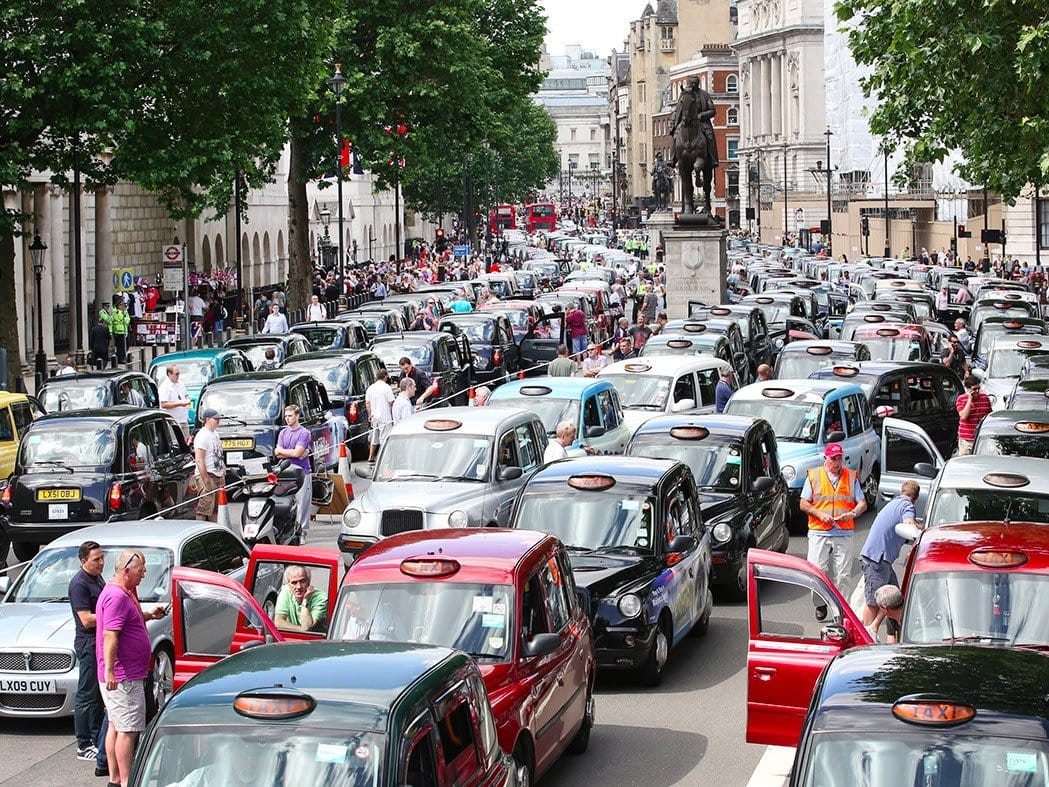 Taxi drivers in one of many protests against Uber

Ultimately is was partly this, or the company’s manipulative nature, that was the undoing of Uber. TfL has previously instructed Uber to give drivers better treatment and questioned the use of ‘Greyball’. ‘Greyball’ is a software program that, according to the TfL statement: “could be used to block regulatory bodies from gaining full access to the app and prevent officials from undertaking regulatory or law enforcement duties.” Uber denies using it to block regulators in London, but the existence of it in the first place simply acts as more ammunition in TfL’s ‘not fit and proper’ argument. Whether you agree with Uber’s practises or not – there’s no denying that we can learn a lot from them about the power of good UX. Their UX has successfully been rolled out to much success over 84 countries – the simplicity and design making sense in a variety of languages and cultures. And the dark side of the Uber experience, while arguably distasteful, kept drivers on the road and rider’s wait times down. Whether they successfully appeal or not, other apps – whether transport-based or otherwise – can take a page out of Uber’s book (but perhaps learn from their mistakes.)