Why are Snapchat trying to make Spectacles work again?

It’s round two for the Spectacles.

The first attempt by Snap Inc. to create a pair of smart-glasses for a mass audience was a resounding failure by all accounts. Despite some excitement early on, the original Spectacles sold only 220,000 units, according to company figures, and lost them almost $40 million from unsold stock. Last November, we wrote about why Spectacles was such a spectacular failure; the main reason being that the product was too limited because it only transmitted video straight to Snapchat. In addition, Snapchat is most popular with 12 to 17-year-olds and their young base of users did not have the money to blow £100+ on such a limited product.

However, Snap are back with Spectacles 2 to the surprise and confusion of many commentators in the technology industry. The company hopes to defy their critics but does this update actually solve the problems that doomed the original product?

The new Spectacles do fix some of the obvious problems with the original product, including:

• A slimmer, sleeker design that makes Spectacles more comfortable to wear and easier to carry.

• The ability to take photos as well as video, with a 1642-pixel resolution – both photos and videos are also now in high definition.

• Water-resistance, meaning you can now safely take them to the beach or a pool. Snap says that you can wear them whilst diving into a pool and not damage them.

On the business side, Snap’s decision to sell Spectacles directly; they’ve abandoned the vending machines that were used for the first edition, should help them to do a better job of gauging demand for the product. Hopefully, this will mean they can avoid the embarrassing write-off that came with their first attempt.

Can Spectacles 2 turn Snap’s fortunes around?

There are good reasons why many are wondering what has inspired Snap to bring Spectacles back. The first roll-out was a disappointment and less than half of customers continued using the product after their first month of owning it, according to Business Insider. However, Snap’s decision to pursue with the product can be better understood through their long-term strategy.

Hardware is generally much more profitable for companies than software and companies that just sell an app often struggle to make money (just ask Twitter). Spectacles represent one of the first moves in a pivot towards hardware for Snapchat, shown through their rebranding as Snap Inc. in 2016. 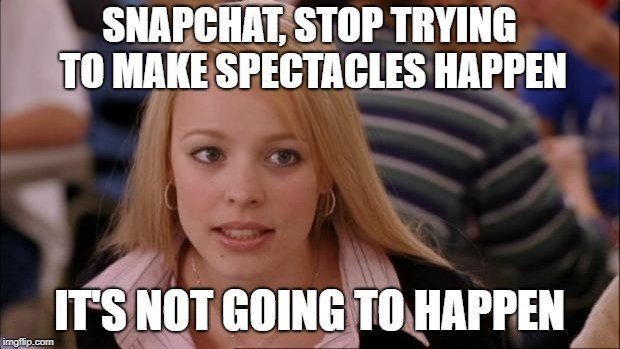 Secondly, wearable AR technology is a potentially huge market and Snap are wise for wanting to make sure they’re in the market early. There is likely to be a brutal war between technology super-giants, such as Facebook, Google, and Apple, to take control of this market and Snap might see Spectacles as a way for them to carve out a niche for themselves. Unlike Google Glass, Spectacles are not designed for a tech-savvy audience. Instead, they’re meant to be a fun accessory for normal people. As Billboard notes, the product seems to be tailored-made for music festivals, by letting fans record video and take pictures of their favourite acts without being that person who has their phone up for a whole performance.

Spectacles 2 are undoubtedly an improvement on Snap’s first attempt and fix many of the serious issues with the original design. However, important problems remain. Spectacles are still inessential as a product and most people will probably see them as too expensive to bother with. However, by selling the product directly, Snap will be better placed to sell the glasses as a luxury accessory for people with more money than sense. The company is already working on a third design of the product and ultimately, it seems that Spectacles 2 are more of a placeholder than an end-point for smart-glasses. It won’t be too long until someone is able to crack the smart-glasses market and by keeping themselves in the game with Spectacles, Snap are giving themselves a much better chance of getting there first.