Will vertical farming be the future of food?

If Old MacDonald had a vertical farm, it might be in a skyscraper, a shipping container, or an abandoned mine shaft.

As we reach the 50th anniversary of Neil Armstrong walking on the Moon, NASA can put its restless feet up for a minute and celebrate its unique achievements in conquering space.

Back in the 1990s, NASA developed aeroponics, a system for growing plants with no soil and very little water in an air or mist environment.

According to them, aeroponics systems can reduce fertiliser usage by 98 per cent, pesticide usage by 100 per cent, and can “uptake more minerals and vitamins, making the plants healthier and potentially more nutritious.”

What is vertical farming?

This is particularly germane to the UK, which uses 72 per cent of its land mass for agricultural purposes, and city-states like Hong Kong and Singapore, which import most of their food.

Vertical farming techniques use a mixture of stacked layers, lighting, non-soil growing mediums such as peat moss, and sustainability features to grow crops in vertical structures like skyscrapers, warehouses and deep mine shafts.

The industry is rapidly increasing in size. Business consulting firm Grand View Research estimated that the vertical farming market is predicted to be worth $10 billion by 2025.

It is receiving increasing attention from investors. One vertical farming company, Dundee-based Intelligent Growth Solutions (IGS) has just received £5.4 million in funding from US investors.

IGS claims it has created a vertical farming system that can cut power costs by half and labour costs by up to 80 per cent.

No wonder the vertical farming market is expected to grow by 25 per cent in the next three years.

As has already been mentioned, vertical farming offers the advantage of increasing food supplies without increasing the finite land area dedicated to producing food.

Like the drip irrigation technology perfected in the drought-stricken country Israel, vertical farming systems use little water to grow crops.

The firm Verticrop can produce 20 times more abundant harvests while using 90 per cent less water than is required for a conventional horizontal farm.

Their hydroponic vertical farming system was named one of the World’s Greatest Inventions by Time Magazine in 2009.

Aside from using less water, crops need fewer chemicals. This has the added effect of improving wildlife conservation, as animals and crops are less exposed to harmful pesticides.

If scaled up extensively, vertical farming could reverse rainforest deforestation, which accounts for about 10 per cent of the world’s global warming emissions.

Moreover, because global warming is making the world more prone to extreme weather events, crops grown in indoor vertical farms are less vulnerable to droughts and floods that increasingly afflict the world. 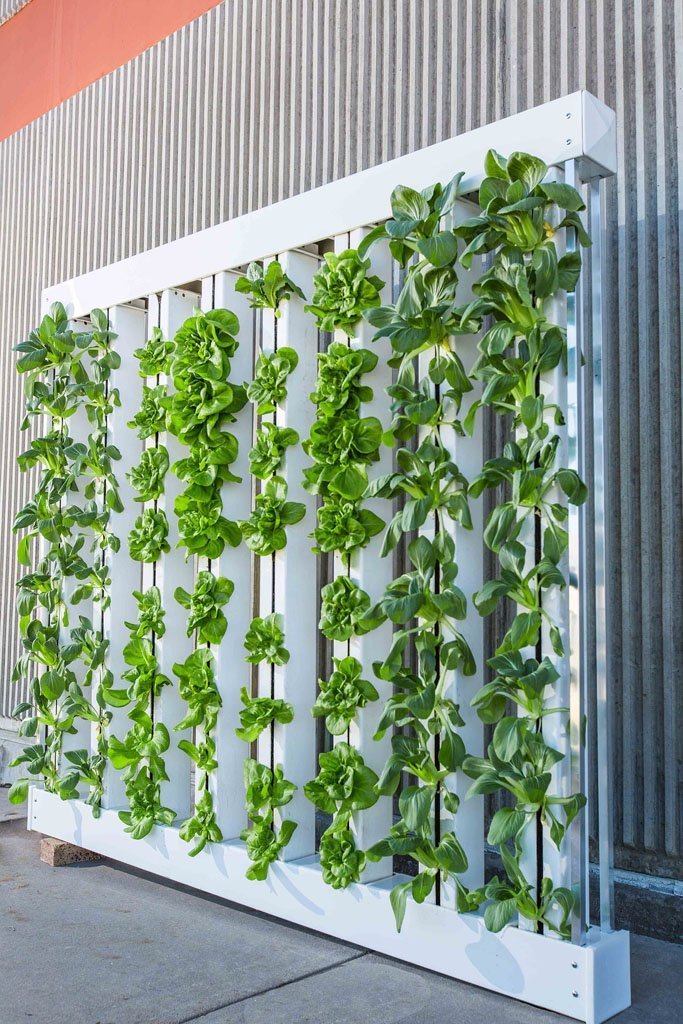 Despite the savings in water, land and chemical usage, vertical farming is an environmental double-edged sword. This is because the artificial lighting and climate control used to grow food indoors require a lot of energy.

Moreover, if the energy grid is powered by fossil fuels such as coal or natural gas, vertical farms could end up hurting the environment.

And were countries to move to a 100 per cent renewable energy grid, there may not be enough energy in the network for vertical farming to become a sustainable mass market.

Even if the power was always running, pollination is difficult. Trying to grow food in an environment without insects requires considerable manual labour that is expensive and time-consuming.

Lighting and heating are also costly, as buildings in urban areas can have high rental costs. Attracting employees to work in urban farming means higher wages are required to meet those workers cost-of-living arrangements.

Automation may reduce the need for skilled workers, but vertical farming technology is not yet mature enough to make urban farming a highly profitable venture.

Will vertical farming become the norm?

Vertical farming technologies are still in the nascent stages of development. No organisation has yet to successfully produce food at a mass scale and make it economically viable.

That’s not to say there aren’t bright spots on the horizon. Firms like Montreal-based Lufa Farms, which designed the world’s first commercial rooftop greenhouse, are very eco-friendly. They don’t use pesticides; they recirculate irrigation water and compost green waste.

But the company remains a Quebec-focused operation. It may be a long time before vertical farming firm like Lufa Farms can be considered a national or international agricultural business.

It will all depend on whether vertical farming technologies become cheaper and more energy efficient.

Electricity must also be powered by renewable energy if vertical farming’s proponents want to ensure their industry is eco-friendly.

The industry is only expected to expand though, radically changing not just what we eat, but how we eat.