If you’re a regular Snapchatter, you’ve probably wasted some time with a dancing hotdog. Now, Snapchat is inviting brands to create their own, in a form of advertising that could actually be a fun user experience.

Previously this year, Snapchat introduced World Lenses. Unlike the filters that augment your face (the notorious dog face filter for example), World Lenses allows you to introduce animated characters into your environment. 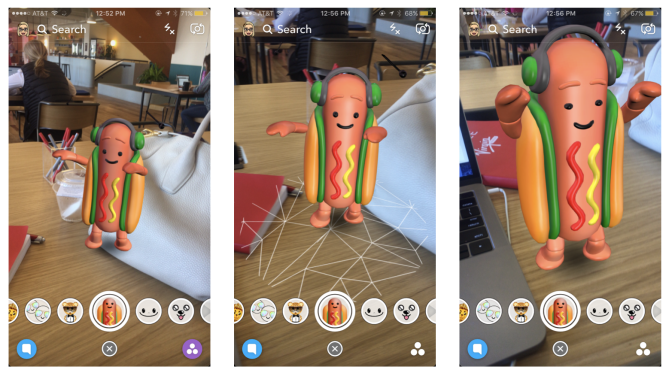 Once in place, the characters remain fixed, allowing you to walk around them. Pre-dating Apple’s ARKit and IKEA’s Place app – this is augmented reality for the sheer fun of it.

Snapchat’s user experience is all about being playful and sharing the little moments and there’s no doubt World Lenses enhanced this. The Dancing Hotdog, for instance, was viewed more than 2 billion times across the world and was the star of many a viral video on other social media channels.

This is a testament to how much users get excited by AR experiences and now, Snapchat is allowing brands to create their own – starting with the new Blade Runner film and Bud Light.

Good for the brand, fun for the user?

There’s no doubt this could be a very effective advertising strategy.

Fun and interactive – the lenses encourage users to actively engage with their brand. This increases brand awareness and favourability. If users have been playing with say, a drinks brand’s character on Snapchat, they could be more likely to opt for it next time they have the option.

However, what about the user in all this? Do users want more adverts in their lives?

Probably not, but the beauty of World Lenses and other augmented reality applications is that it doesn’t feel like advertising – and it can even be a useful step in the process of making a user a consumer.

The IKEA Place app uses augmented reality to allow users to ‘try out’ the products they want to buy before they buy it and Snapchat seems to suggest a similar application in their blog post. Jeff Miller, global head of creative strategy at Snapchat, told Adweek that Snap Inc is looking to “go further down the funnel and add a sense of utility.”

In addition to being useful, it’s also far more exciting and enjoyable for users to play with an advert, rather than a static image or video they’re forced to pay attention to.

The blog states that “Lens isn’t just a toy – it’s a tool to drive consideration, purchase intent, and other business objectives.”

The success of Snapchat’s Lens, and the fact it’s clearly a effective advertising tool demonstrates the power of augmented reality. If companies are looking to expand awareness, increase sales or attract new consumers – it’s increasingly obvious that AR is the way to do this.